Republic Day is one of India’s biggest national holidays. It is celebrated on the 26th January, which is the date that the Constitution of India was put into effect. This replaced the 1935 Government of India Act and India’s governing document, which turned the country into a new republic. The 26th January was chosen for Republic Day since it was on this same day back in 1929 that the Declaration of Indian Independence was chosen by the Indian National Congress over the Dominion status that the British Regime was offering. 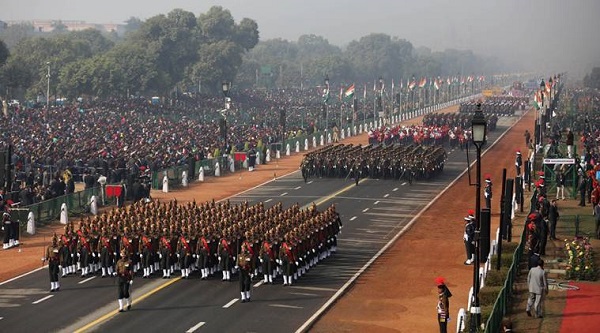 It was the 15th August 1947 when India gained their independence from the British Raj. However, they still did not have their own permanent constitution - the laws of the country were still based on the Government of India Act 1936, which had been put together by the British. So, while Independence Day is there to celebrate India’s freedom from Britain, Republic Day is there to celebrate the day India’s own constitution came into force.

A draft constitution was written up and submitted on the 4th November 1947 to the Constituent Assembly. The Assembly discussed the constitution in meetings which were open to the public over the course of 166 days spread out over two years, eleven months, and eighteen days. After plenty of deliberation and a number of modifications, the 308 Assembly members signed two copies of the document (one in English and one in Hindi) on the 24th January 1950. A couple of days later, on the 26th January, it was put into effect across the whole nation.

How Do Indians Celebrate Republic Day?

Just like the celebrations for Independence Day, Republic Day is also celebrated with huge parades in New Delhi and the capitals of the different states across the country. In New Delhi, the grand celebrations take place at the Rajpath (a ceremonial boulevard) in front of the President of India. The parades go by India gate, which is a war memorial for the 70,000 British Indian Army soldiers that died in the First World War.

The Indian Navy, Army, Air Force, performers and artists from all across India take part in the parades to showcase India’s cultural diversity. The President and Governors of state receive military salutes during the different parades and the Indian Air Force fly past marks the end of the parades in the capital.

What Happened on Republic Day 2017?

Each year different types of shows are put on to ensure that things remaining entertaining for the public to watch. If we had the same old parades and activities each year, then the country would certainly begin to lose interest. As well as different forms of entertainment, a Head of State from abroad is invited to come and watch the celebrations. For example, American President Barack Obama was invited in 2015, while Francois Hollande, the President of France was the honorary guest for 2016. In 2017, Sheikh Mohamed bin Zayed Al Nahyan, the Crown Prince of Abu Dhabi, was the special guest.

The 2017 Republic Day was the 68th edition and it was celebrated with gusto and pomp. There were many firsts at these celebrations such as:

A United Arab Emirates contingent marched: For the first time in Republic Day’s history, there was a foreign contingent at the head of the parade along Rajpath. The contingent was led by Obaid Al Zahumi, the Brigadier, and the crowd loved it.

NSG Commandos marched: The Black Cat Commandos, known as the National Security Guards, participated in a parade for the first time. Sixty commandos dressed fully in black and fully armed marched down Rajpath and gave a ceremonial salute to the President.

Dhanush Howitzer Displayed: Dhanush is India’s first ever 155mm artillery gun and it was displayed to the country for the very first time. The Indian Army now has three of these guns at their disposal.

Tejas LCA Fly Past Rajpath: The Tejas Light Combat Aircraft, like the Dhanush Howitzer, was also showcased to the people of India for the first time. Three of these flew over the Rajpath to the delight of the cheering crowd below.

While the parades, celebrations and special guests vary with each year, there is one thing that remains the same and that is the Beating Retreat ceremony that is held when the end of Republic Day has been declared. This ceremony takes place on the 29th January, three days after Republic Day. The ceremony is performed by the Indian Navy, Indian Army, and the Indian Air Force, and it takes place on Raisina Hill (which is where the Presidential House is located) and Vijay Chowk (an adjacent square.

The main guest of the ceremony is the President, who is escorted by a calvary unit known as the PBG. When he arrives, the commander of the PBG commands his unit to give a National Salute, and then the Indian National Anthem is played by the Army.

Bands from the Air Force and the Navy play popular tunes such as Abide With Me, which just so happened to be the favourite hymn of Mahatma Gandhi, who was the leader in the campaign for independence from British sovereignty and was the inspiration for civil rights and freedom movements across the world.

On the day before Republic Day, the President hands out Padma Awards to citizens who have done a service to their country. They are split into three different categories: Padma Vibhushan, Padma Bhushan, and Padma Shri. The Padma Vibhushan is the second highest honour that a civilian can get in India. However, while those in Britain can use honorary titles such as Sir or Madame in their names, those who receive a Padma Award cannot - if they do, they will forfeit their award.

Each citizen is given a certificate from the President and a replica medallion that they are allowed to wear during state functions and ceremonies if they so wish. A commemorative brochure is also handed out that gives details as to why each person is being given an award.

Indian Cricketer Have Their Say

Cricket is absolutely huge in India – in fact, you might as well say that it is a religion. Anyone who has played for their national team is treated like royalty, especially those who go on to achieve greatness in the game. Each year different cricketers take to social media platforms such as Twitter to wish all of their followers a happy Republic Day. Below we have provided you with a selection of Tweets from some of India’s best ever cricketers such as Virat Kohli, Virender Sehwag and Sachin Tendulkar. 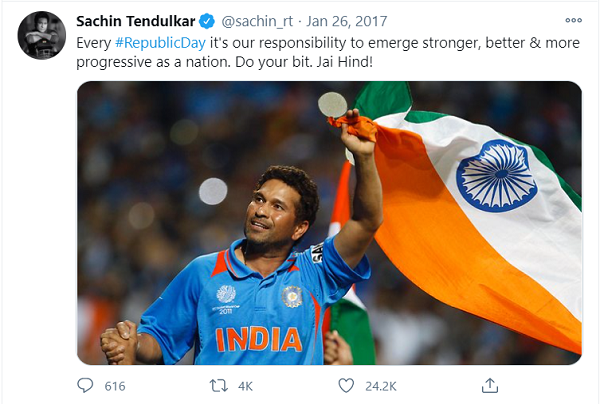 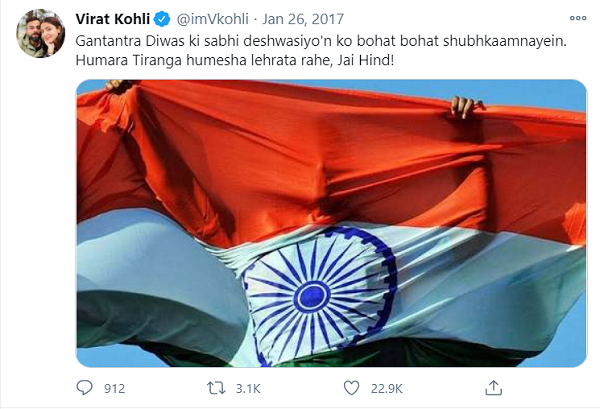 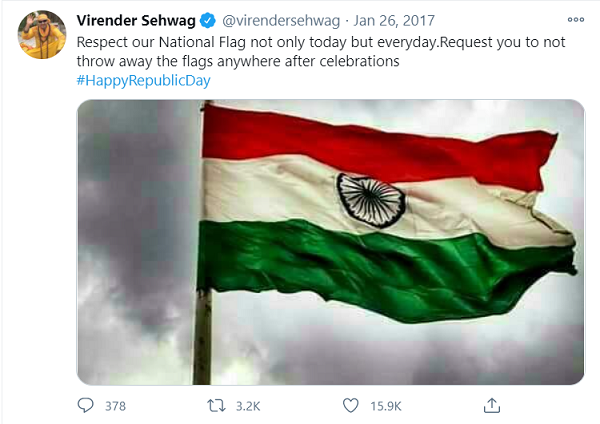 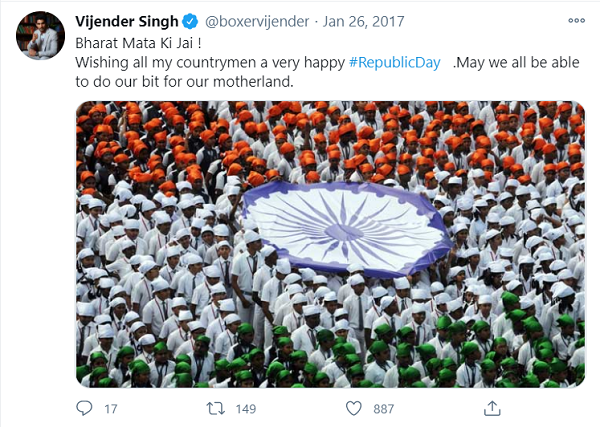